Khichdi (also spelled as Kitchari) is a delicious food preparation made from the combination of rice and lentils, particularly yellow mung dal. This Indian vegetarian preparation is equivalent to chicken soup in terms of nutrient composition. The taste and flavor of kitchari is further enhanced when it is eaten with plain curd.

Good points about the recipe:

In Ayurveda, Khichdi is considered as a great source of nourishment. A combination of cereal (rice) and pulse/dal (mung) makes it a complete source of protein, which is required by the body. Good sources of vegetarian protein are less as compared to non-vegetarian sources. Combination of rice and mung dal makes kitchari a good source of essential amino acids. Like other cereals, rice is low in amino acid lysine. On the other hand, dals and pulses are a good source of amino acid lysine but it is low in other amino acids such as cystine, tryptophan and methionine. But rice contains high amount of these amino acids which are low in dals and pulses. Therefore, such a combination of rice and dal makes kitchari a perfect source of vegetarian protein.

Khichdi is considered a balanced and wholesome meal. Besides having a good combination of healthy carbohydrates and protein, kitchari is also packed with other nutrients such as dietary fiber, potassium, phosphorus, magnesium and small amount of vitamin C. Addition of pure ghee further enhances the taste and well as nutrient absorption. Different vegetables can be added to kitchari to increases the content of dietary fiber and other vitamins and minerals.

Khichdi is a light food preparation that improves overall digestion. In Ayurveda, it is believed that health starts in the digestive system. It is very well known that ‘all disease begins in the gut’. Therefore, it is very important to keep the gut clean and healthy. Besides improving the digestion, kitchari also soothes the inner intestinal walls. Eating very spicy and unhealthy food may irritate the inner intestinal wall. Prolonged stress may also compromise the digestion and deteriorate the overall gut health. Khichdi is a healing food preparation that can be used to cleanse the gut. A mono-diet of kitchari resets and refreshes the entire system. The addition of different herbs during kitchari preparation improves the secretion of gastric juices and enzymes that helps in the breakdown of food easily.

Eating Khichdi improves the digestive function and removes all the toxins out of the body, which may be formed due to the consumption of unhealthy meals. With such an elimination of toxins, the absorption of nutrients is improved. Rice (a component of kitchari) is easy to digest. This suggests that your gut may not need to work hard to receive the nutrients from rice. Unlike other dals and lentils, mung dal does not produce any intestinal gas. Thus, such a combination does not add any stress of pressure on the digestive system. In addition to this, pure ghee added to kitchari while cooking further eases the digestion and absorption of nutrients.

Soft-mushy Khichdi is a nutritious food preparation for babies. Kitchari is a perfect mixture of protein, dietary fiber and other vitamins and minerals, which is required by the body for overall well-being. It is very well known that babies grow at a fast pace and during this period of growth it is very important to feed them with protein and other nutrients. Khichdi is a type of Indian porridge, which is a combination of complex carbohydrate from rice, and plant based protein from mung dal. Carbohydrates are the main source of energy for the body and brain whereas, protein strengthens the muscle mass. Furthermore, kitchari is also rich in dietary fiber that relives constipation, a common gut problem in most of the babies. The nutrient composition of kitchari can be enriched further by adding different vegetables to it. Kitchari powder can be made for babies by mixing roasted rice and mung dal powder. This can be further cooked like normal kitchari. Initially this can be introduced and then normal kitchari can be made a part of their diet.

A study showed that Indian food preparation such as Khichdi is a good source of dietary fiber. It was found that 100 grams of rice contains 4.1 grams of dietary fiber and 100 grams lentils contain 10.31 grams of dietary fiber. Many different studies have shown that eating foods rich in dietary fiber helps in the management of uncontrolled diabetes mellitus, altered lipid profile and heart diseases. Eating meals rich in dietary fiber makes one feel full (provide satiety) and delays hunger pangs. This is beneficial for those who want to lose weight. Fiber rich foods also help to relieve gut problems such as constipation. The study further compared various Indian food preparations and found that dietary fiber in kitchari was more than vegetable pulao, Bisi bele bhath, chicken pulao, khara bhath, pongal and dal fry. (1)

Tridoshic food is the one that has the ability to balance all three doshas (Tridosha)– Pitta Dosha, Vata Dosha and Kapha Dosha. Kitchari is a staple food of the Ayurvedic diet that has a calming effect on the mind and the body. Thus, kitchari is considered to be a tridoshic food that balances all the three doshas. Besides this, it also helps in detoxifying the body, strengthens the immune system and improves energy levels by balancing the basic elements- earth, water and fire.

As per Ayurveda, Khichdi can heal various diseases and ailments. In Ayurveda, mung dal is cherished because it is nutritious and easy to digest as compared to other dals and pulses. A combination of rice, mung dal, pure ghee and a variety of spices makes this Indian preparation a wholesome meal. Since the olden days, kitchari is used as a weaning food to nourish the growing babies. It is also used for elders and sick individuals. Besides this kitchari is also eaten during detox, cleansing and spiritual practice. It doesn’t just nourish the body but it is beneficial for the mind and soul. Usually white rice is used for the preparation of kitchari because it is without the outer husk, which makes it easier to digest. On the other hand mung dal is classified as ‘vata balancing’ in Ayurveda which means it does not lead to flatulence. Furthermore, kitchari also produces a spiritual state and calms the inner self. It facilitates fat metabolism that is more fat is used as a source of energy rather than being stored in the body. Such a state provides a calming effect on the body. To create such a state of stillness Khichdi was fed to the monks in the ancient age. Khichdi also removes all the toxins out of the body thus providing a healthy and calming environment in the body. Furthermore, Khichdi is suitable for all types of body and during illness or ailments; it helps the body to rest completely and speeds up recovery. 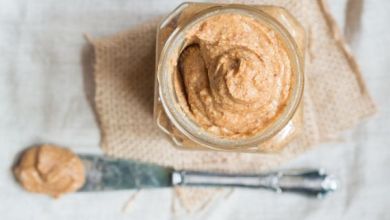 How to Make Almond Butter